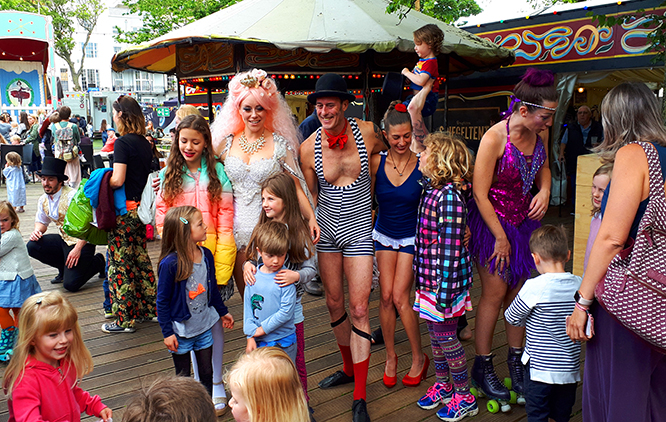 On 23 March 2020, we had the heartbreaking task of announcing that the Brighton Festival was to be cancelled for the first time in its 53-year history due to the coronavirus pandemic. Like so many arts organisations in Brighton & Hove and across the world, we were in a state of disbelief. Thanks to a great board of trustees and amazing support: from artists, our audiences, our donors, and from Arts Council England and Brighton & Hove City Council, we were able to plan for 2021 in a pretty realistic way. Early on, trustees cautioned that the pandemic could run and run, so we set out to organise (and re-organise!) a festival that could happen ‘come what may’, focusing on the meaningful experiences a festival could offer, even if faced with severe restrictions, rather than mourning (too much) the loss of the massed experience. It was in that spirit and against all the odds, we were the first UK city to deliver a multi-arts festival this May.

Our team of incredible festival producers and venue staff were working to ever-changing and uncertain deadlines, as we waited for the latest government guidance on when restrictions for public events could be lifted. Our guest director, Lemn Sissay OBE became the first artist to work with us two years in a row and together we developed a programme around his theme of ‘care’. It was a joy to hold a festival that was so overtly celebrating our collective need to care for each other after such a year of devastation and disruption, and to find ways to share and celebrate together. Artists, behind the scenes creative workers, Brighton Dome staff, partner venues and programmers all rose to the challenge, making incredible creative responses to the theme and adapting work to incorporate safety measures in line with the regulations.

On Saturday 1 May, Lemn Sissay, Cllr Phélim Mac Cafferty and the city’s Mayor Alan Robins officially launched the festival with the opening of the Children’s Parade at Large, a colourful display of artwork made by schools stretching along New Road, to symbolically mark what would normally have been the opening event involving thousands of children and volunteers.

Across the month of May, over 100 events were delivered safely and successfully navigating two steps of the lockdown roadmap to the delight of both audiences and artists, online and in person. Installations and performances extended from city centre locations, along the coastline, to remote rural beauty spots.

Young people were nurtured, mentored and given a creative platform through projects with LOOKOUT! and Little Green Pig. Our Place returned for a fourth year, with a new additional location at Moulsecoomb and Bevendean, bringing much needed art and entertainment to residents who had been isolated through the lockdown.

Historically, periods of great disruption and change have been met by flowerings of artistic creativity and invention, and festivals provide the opportunity to reflect, consider and reimagine.

Following on from the success of this year’s festival it is with huge pleasure that we have announced plans for 2022 to work with Syrian architect and author Marwa al-Sabouni, and Brighton based theatre artist Tristan Sharps from Dreamthinkspeak, as the first Guest Co-Directors in the festival’s history. Through their international yet deeply people-focused practices, their hope-filled vision will make for a unique festival experience as we emerge from the aftermath of the coronavirus pandemic.

My thanks go again to our funders, Arts Council England and Brighton & Hove City Council, and to all our amazing partners who supported the festival to bring the arts back to our venues, communities and region this year. We’ve learned a lot we hope we never have to repeat but we’ve also found ways to collaborate, share and present work that I hope will remain with us for years to come.

The preparations for Brighton Fringe 2021 really began in October last year when we ran the Autumn Season, which consisted of 44 live and 43 digital events. The hybrid model was one that we would never have considered before, so it required some considerable website investment to get right. It was last-minute and riddled with problems but audiences loved the event and we somehow managed a combined audience of over 12,500 people. When the lockdown came at the end of December, it was clear that the original May dates were going to be a real challenge, so we decided to delay by 3 weeks, to begin rather than end with the second May bank holiday and half term. Although 3 weeks might not feel like much, we had come to see from both, the Warren on the Beach in the previous Summer and our own Autumn Season, that during this pandemic, weeks really do matter and it’s important to be agile. We were therefore also ready to consider a second change if the pathway still proved too tight. I remember being lambasted at what was the height of the second wave for the decision to even consider going ahead at all, but with successive audience surveys showing over 80% of people desperate to see our return, we pressed on.

Financially, Brighton Fringe stood on a precipice though. Having cancelled the May 2020 Fringe just 6 weeks before it began and being unsuccessful with our first CRF bid, we would not have survived long if we hadn’t received support with CRF2, which thankfully we did. Saved from the brink, we proceeded with our plans. Meanwhile, the Warren and Spiegeltent, as well as some other venues, decided to run an additional two weeks longer than the 28 May-27 June core dates due to their massive overheads and risk involved. We were therefore suddenly not only running three weeks later, but became a six week festival as well.

Again, the need for agility was key. We chose against producing a brochure, which meant that changes, and there were many, could be included within the digital offering without much disruption. It also meant that deadlines and ticket on-sale dates could be fluid as the programme grew week by week all the way up until the start of the festival. By the launch, we reached 613 events, some 7,000 performances. This was broken down between 460 in person and 153 digital events. With more time to promote and sell tickets, as well as a return of the major hubs, the awareness was quickly high, and the response from audience was way beyond anything that we had expected. By the end of the festival, we had sold over 80,000 tickets, with overall attendances sitting at around 170,000 (including non-ticketed events). This represented an increase in attendances per performance compared to 2019, despite social distancing.

Challenges were multiple though and the increasing Covid infection rate started to take its toll especially during the final two weeks as performers, staff and audiences were getting either pings or infections within their bubbles. These were fortunately still isolated instances, and venues and companies responded extremely well to the issues faced. I think that the learnings from the Autumn Season were especially important here. The other challenge was with audience behaviour, especially for the later evening shows, in terms of both mask-wearing and maintaining social distancing. Again, this was more of an issue as the festival wore on.

The one surprise for me was that after all the fanfare about the new normal of digital events becoming so much more popular, that in practice when put alongside a large, in-person programme, they did not perform as well. I think that in the future there is still a place for them though, but not without a good artistic reason for them to be digital rather than in-person.

Overall, it was an exhausting but hugely satisfying experience this year. It was an opportunity to provide a platform for thousands of people to put on work and for tens of thousands of people to enjoy it, too. We are pleased to have been amongst the first to return and to pave the way for others to follow and hopefully to learn from both the successful and not so successful aspects of that return! 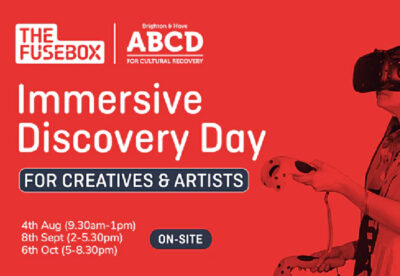 Immersive Discovery Days for Creatives and Artists at The FuseBox