Greater than the sum of our parts – the power of collaboration

Since launching in March 2021, the ABCD programme has raised almost £500K for projects in the city and reached over 500 creatives through commissions, events and business support.

The pandemic has been marked by many things, not least the countless acts of generosity and pulling together that embodied the values of community and collective responsibility.  This was certainly true in the creative & cultural sector which saw a huge proportion of its workforce suddenly left without any means to earn a living.  All kinds of initiatives sprang up as the sector sought ways to support the freelancers who are its lifeblood.

In Brighton & Hove this was spearheaded by the ABCD Plan for Cultural Recovery, which was created through the input of over 100 creative & cultural workers.  Since launching in March 2021, the ABCD programme has raised almost £500K for projects in the city and reached over 500 creatives through commissions, events and business support.  The plan has had significant support from Brighton & Hove City Council and Arts Council England and through partnerships including with the Brilliant Brighton Business Improvement District.  But the sector has also stepped up to support its own.

When the plan first launched, a number of the National Portfolio Organisations (NPOs) in the city contributed funds to help ensure freelancers were represented on the working groups that are guiding the delivery of the plan, and paid properly for their time.  NPOs receive core funding from Arts Council England and, as well as their individual actions to support the artists and other freelancers they work with, many wanted to contribute to the collaborative model being developed through ABCD.  It was an act of generosity in the middle of very difficult times and thanks goes to Brighton Dome & Brighton Festival, South East Dance, New Writing South, Carousel, Culture 24 and Blast Theory for that support.

Their example inspired a similar approach to the third round of the government’s Cultural Recovery Fund.  Organisations applying for CRF3 were invited to include a % for cultural recovery that would be administered centrally through ABCD.  The contributions helped to support freelancers’ continued involvement in the working groups and in decision making, and also helped to support creative practitioners on the Regroup ‘n’ Renew Leadership Support Programme.  The credit goes to Brighton Dome & Festival, Brighton Early Music Festival, Brighton Peoples Theatre, Little Green Pig, LOOKOUT Brighton, Same Sky, Spymonkey, The Dream Engine International and The Spire Arts.

Although many of these were small organisations, the collaborative approach enabled us to be greater than sum of our parts and is something that has happened in very few places as far as we know.  For me, it demonstrates that organisations in the city are willing to do things differently and to embody the values that were articulated in the recovery plan.

How best to build on this collaborative spirit and action will continue to be a vital part of the cultural recovery process, but right now, I’d just like to acknowledge and thank the organisations who have helped pave the way. 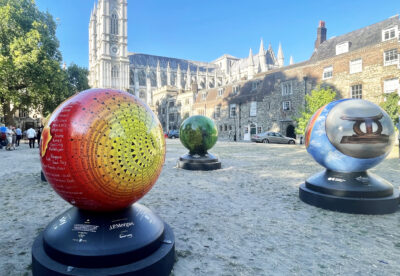 The World Reimagined: ‘The Inner Voice Through Music’